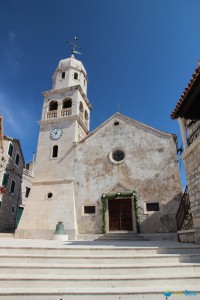 In Prvić Luka there are significantly more berths. Visitors can either moor at the large jetty with mooring lines or at one of the 12 buoys in the harbour basin. The oldest village on the island with its lovingly restored stone cottages stretches along the protected bay. A memorial centre at the harbour jetty was opened in 2014, commemorating the island’s most famous son, Faust Vrančić, a scientist and discoverer. There are numerous restaurants right on the waterfront, attracting visitors with their fresh fish and home-made wine, accompanied by lapping waves. Prvić is the ideal place to relax.

However, we cannot stay, as even though it is difficult to tear ourselves away, we still have to go to Zlarin. The island village of the same name lies in the north of the island. For centuries the locals in Zlarin fished for sponges and corals, but that is now history. Today, the approx. 150 inhabitants live on fishing, winegrowing and tourism.

Sprawling palm trees decorate the promenade, green lime-washed window shutters adorn the facades of the well-kept stone cottages. And a few restaurants in between serve their dishes and drinks.

The harbour is a fishing harbour, ferry port and yacht harbour in one. Yachts moor on the north side of the long jetty. Electricity, water and mooring lines are included. A NW wind generates a strong swell, causing our yacht to rock all night long. Fortunately, at the Aldura konoba right behind the jetty they not only serve good food and delicious draught beer, but also a good strong espresso.

So, now invigorated, we set off to our next destination. But before we can head for Kaprije, we want to make a short trip to the island of Tijat. Tijašćica bay is located in the south of the island, has clear water and is surrounded by green pine forests. 18 buoys have been available here since 2012. There is a small rotisserie at the northern seafront that only opens in  summer. Should you need an after-dinner walk, you can hike on the mountain, which is 120 m high and has a summit cross. Visitors can enjoy a glorious view from up here of the surrounding islands. 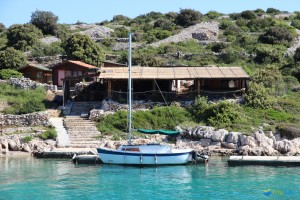 We plane towards the north-east coast of Kaprije to Medos bay. The bright turquoise clear water is noticeable already at the approach. The seabed can be seen clearly even where the water is 10 m deep. Yachts moor at a small floating jetty with mooring lines. Should the 6-8 berths be taken, there are still 4 buoys available. All of the berths belong to the Kunjka konoba, which opened in 2011. The small konoba is low-key, but fits into the landscape perfectly. They not only serve fresh fish and barbecued steaks, but Lammpeka also comes highly recommended, however it has to be ordered at least two hours in advance because of the long cooking time.

Further to the south, hidden behind the small island of Oštrica, is the Antonio konoba. Antonio Junaković runs this small konoba with a guesthouse. The speciality here is the Peka made with lamb, octopus or calamari.

Fans of fine-dining will get their money’s worth in Nozdra bay in the south of the island. Matteo has established itself here. The landlord Mate Obratov had already made a good name in the Kornati before he came to Kaprije. The restaurant is built into the slope and extremely sleek. Not only can guests enjoy the tuna carpaccio speciality, but naturally there are fresh fish and meat dishes, too. The jetty provides berths for 10-14 yachts. Because of the shallow water, boats moor bow-to. Right next to Matteo is G8. Not quite so well-known but more homely and just as good. 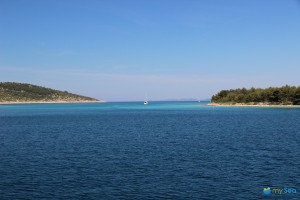 We sail around the southern tip of Kaprije and set off towards Kakan, or more precisely Potkučina bay. We are impressed by the colour intensity of the water right at the approach, perfecting the impression of a perfect lagoon. The Borovnjak islands off the coast provide shelter from waves. There are 60 buoys in total in the bay. The “Babalu” rotisserie is nestled in the mountain’s crest between green pine trees and bushes. Not only will guests be served good food here, they can also enjoy a glorious view of the bay. The concession holder of the buoys is also the owner of Paradiso in Tratica bay. Zoran, the boss of the Paradiso konoba, could have even just stepped out of a Robinson Crusoe film, his hair being so white and wild. The white beard and the white hair have long become his trademark. Together with his wife he mainly serves fresh fish and seafood. They also have meat dishes. The tables at the konoba are under pine trees. A small jetty also belongs to the konoba with berths for 3-4 yachts. Sailing yachts, however, have to keep some distance between each other because of their draughts. 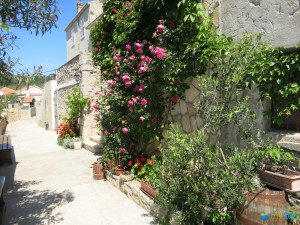 The distances between each island in the Šibenik archipelago are very short. There is only 1.2 nm between Tratica bay in Kakan and Kaprije harbour in the island of the same name. Kaprije harbour actually consists of one long jetty with places for about 20 yachts. The northern side has to be kept clear for ferries. Yachts moor on the southern side with mooring lines. Water and electricity is available. There are 24 buoys to the south of the jetty for visitors. The older part of the village with its stone cottages is located slightly higher up, a few newer houses are clustered around the harbour basin. In spring, oleander blossoms in front of practically every house, and vegetables, figs and grapes grow in the immaculate gardens. 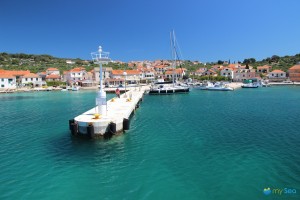 We go inside the Kot Kate konoba, slightly above the harbour. Kate runs the cosy konoba in a small side street together with her son. We meet two policija officers there whose speedboat we had already spotted in the harbour. They tell us that a military exercise will be taking place in the next 24 hours just off Žirje and that the entire maritime area to the west and south-west of Žirje is closed. Annoying as that is exactly where we wanted to go next. So we decided we would first order some fresh gilthead seabream at Kate’s konoba served with vegetables from the garden. Simply delicious! Kate´s son is a fisherman and a fireman. Meanwhile, he has rang “Ante”, a friend in Žirje. Ante is also a fireman, born in Žirje and knows the island like the back of his hand. He offers to take us across the island in his old off-road vehicle and to show us everything. A local tour guide! We willingly accept his offer, obviously. Before we leave, we drink some more of Kate’s home-made schnapps. They really do work small miracles in moderation.

Have you already read part 1? And don’t forget part 3!

Find out more on mySea.