Everyone’s heard of Kvarner, the Kornati, Krka! But what about Potkučina, Prvić or Zirje? If you were to ask a skipper about their preferred destinations in the Adriatic coast, the Šibenik archipelago will hardly get a mention, and if it does, then at the most as a stopover on the way to Skradin. Most charter guests also prefer to start somewhere between Zadar and Murter or Trogir and Split. Even though Šibenik is centrally located in between the international airports of Split (about 60 km) and Zadar (about 75 km) and the motorway exit is only a few kilometres away from the harbour and marina, Šibenik was never able to establish itself as a tourist destination unlike its popular neighbours.

But why is that? Is bad marketing to blame or a lack of infrastructure or less attractive destinations? It’s true that Mandalina Marina is the only marina and the harbours also have expansion potential. Equally true is that the islands are abundant in beautiful bays and sheltered anchorages. Nature lovers, discoverers and keen swimmers will get their money’s worth here, too.

Šibenik with its 43,000 inhabitants is more urban than other places on the Adriatic coast. The reason for this is not least because Šibenik never had to push tourism like other places that mainly live from tourism. This town on the river Krka still has an intact industry today and many people work in the energy sector. 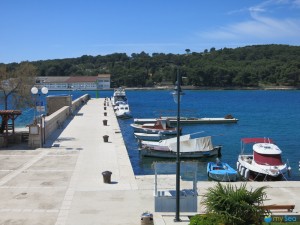 They simply aren’t dependent on tourism as much as the well-known towns and villages nearby. So it’s hardly surprising that you will see less tourists in Šibenik than e.g. in the neighbouring town of Vodice, which is more developed for tourism. There is not much for visitors to see, only industrial plants and harbour installations, apart from when they arrive and depart. Then they get to see especially the magnificent buildings built during the old Austrian empire, the Venetian fortifications, palaces, churches as well as cafés and restaurants in historic buildings. People who are interested in culture but while holidaying still do not want to miss out on any urban dynamism, they should visit Šibenik, also a UNESCO World Heritage site. And not only as a quick side trip. 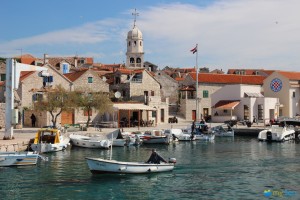 The entrance to St. Anthony’s Channel has red and green markings on both sides and is completely hassle-free even in the dark. Signalling equipment has been installed for ships weighing at least 50 tonnes. We pass quickly through the channel, which is between 150 and 220 m wide, in spite of the speed limit of 10 knots. The cliffs on the south side protrude slightly more steeply but are just as green as the cliffs on the opposite side. At the western end of the channel there is a small anchorage and an imposing fortress in front of it. At St. Nicholas fortress, dating from the 15 th century, visitors can moor at a small jetty. However, there is only space here for one single yacht. And the swell generated by the incoming and outgoing ships is quite significant.

But we want to keep going. The engines of our Phantom 40 push powerfully through the glassy ocean towards the north-west to Prvić. It is the closest island to the mainland and a worthwhile destination. Both places on the island – Šepurine in the north-west and Prvić Luka in the south – are a clear contrast to touristy Vodice or urban Šibenik. It is a lot quieter and more relaxed here. The 500 inhabitants are mainly among themselves now in the pre-season. Only a few yachts manage to find their way here. We first call at Prvić Šepurine, the main town on the island. Šepurine is a quiet place, off the beaten mass tourist track. The church of St. Mary of the Assumption towers over the village and its 400 inhabitants, many pretty stone cottages are clustered around the harbour. 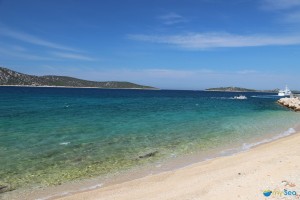 Now in May, many locals are still busy getting ready for the new season. The final touches are being done on the facades, fishermen are painting their boats and the konoba terraces are being prepared with seats. Even thought the May sun in a cloudless sky is already radiating heat, proclaiming the approaching start of the season, it is not hectic. Not even Maria, the owner of the Bare konoba. She is pruning the small olive trees in front of the entrance to the konoba. And she tells us that it is very difficult in the season to get one of the few berths at the harbour. From June to September the berths are usually taken by noon. Not totally selflessly she adds that sometimes it is possible to reserve a berth at her place. This, of course, also includes a visit to the konoba.

Find out more on mySea.